A new country is being born.  White settlers have multiplied and spread across a wild frontier filled with new and sometimes unknown dangers.  Joseph Martin lead an expedition to the  area of Powell’s Valley in Virginia, a race against other settlers, to secure land.  After beating the other party by two weeks and building a fort, Indians attacked sending everyone back whence they came.  Early the next year, Martin returned to rebuild what’s now Martin’s Station.

This last stop, before settlers reached Kentucky, became a small yet  important part of American History.

Join the ‘raid’ this weekend just 6 1/2 miles north of Cumberland Gap in Virginia. Click below  for more information. 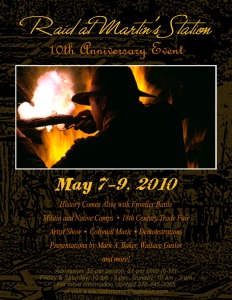